Home » About Us » History

Adult Day Programs and Personal Attendant services can be available at no cost to you via Medicaid Waiver available through State of Hawaii, Department of Health Developmental Disabilities Division (DDD).

Adult day programs, employment assistance, housing and more. We are here for Hawaii's persons with disabilities.

Arc of Hilo offers Commercial Laundry, Landscaping & Janitorial Services. We are staffed by individuals with disabilities. Services for government, businesses and personal clients.

History of Services in Hawaii for Individuals with Developmental Disabilities

The history of services in Hawaii for individuals with developmentally disabilities is a terribly tragic story of segregation and denial of rights.  However, in some ways, the facilities and even terminology of the day was more progressive than in other mainland states during this time period. 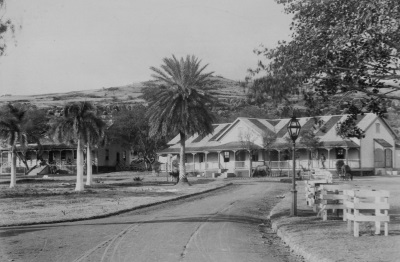 The Oahu Insane Asylum was completed in 1866, For almost one hundred years, insane asylums and the congregate institutions were built to care for the developmentally disabled. http://imagesofoldhawaii.com/insane-asylum/

The Oahu Insane Asylum was founded by King Kamehameha IV in 1866 on the Iolani Palace grounds in Honolulu.  A 1863 law passed by the Hawaiian legislature states: “A building is to be erected for the reception of insane persons. This facility will furnish restraint till the person becomes of sane mind or is discharged.”

The Oahu Insane Asylum was completed in 1866, and the first six patients were transferred to the hospital from the jails at which the mentally ill had previously been kept. By 1867, there were 62 patients.  For almost one hundred years, insane asylums and the congregate institutions were built to care for the developmentally disabled. http://imagesofoldhawaii.com/insane-asylum/

“On January 6, 1930 the Oahu Asylum closed and the U.S. Army moved the 549 patients to the new Territorial Hospital in Kaneohe. Even at its opening in 1930, the newly named Territorial Hospital was over-crowded, and overburdened facilities have been the situation ever since. It was not yet been possible for the Legislature to provide sufficient appropriations so that adequate buildings and staff could be maintained by the hospital, in spite of great advances in the hospital program itself. In 1939, the control of the Territorial Hospital was changed from the Board of Health, where it had been since its opening, to the newly formed Department of Institutions.”2 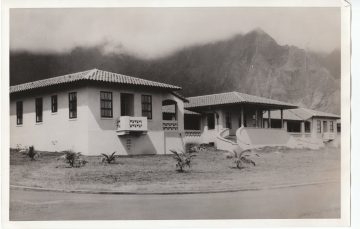 The Territorial Hospital, Oahu 1931 - with its spacious grounds and Spanish Mission revival style architecture, reflected the period’s more enlightened view on the treatment of the mentally ill, and was considered a model of its kind.

“The new hospital, with its spacious grounds and Spanish Mission revival style architecture, reflected the period’s more enlightened view on the treatment of the mentally ill, and was considered a model of its kind. The December 13, 1931 Honolulu Advertiser reported that mainland experts who visited the institution found it equal to some mainland hospitals and “far superior to most of those to be found anywhere.” With magnificent views of both the Koolau Mountains and Kaneohe Bay, the design of the new hospital strove to avoid a “frigid institutional atmosphere,” (Honolulu Advertiser, November 24, 1929) and provided ample room for recreation and farming. The physicians felt such beautiful surroundings would have a beneficial effect upon the patients. Equipped with its own sewage plant, power house, water system, bakery, kitchen, laundry facility, and ice plant, the new hospital was likened to a city unto itself, a “haven of refuge for the insane” (Ibid.). The patients worked in the laundry, bakery, kitchens, shops, sewing room, and the farm, which included a dairy.

Not only did the physical plant indicate the changed attitude towards the mentally ill, but also the terms employed in the administration of the hospital disclosed the shifting philosophy of treatment. Terms such as “mental illness,” “order of hospitalization,” and “conditional discharge,” supplanted such words as “lunacy,” “insanity,” “order of commitment,” and “parole.” The complex itself was called a “hospital” rather than a “lunatic asylum” or “insane asylum.” Although accommodating great advances in the treatment of the mentally ill, the new hospital primarily served as an institution of custody rather than one of treatment.”  https://livingnewdeal.org/projects/territorial-hospital-kaneohe-hi/ 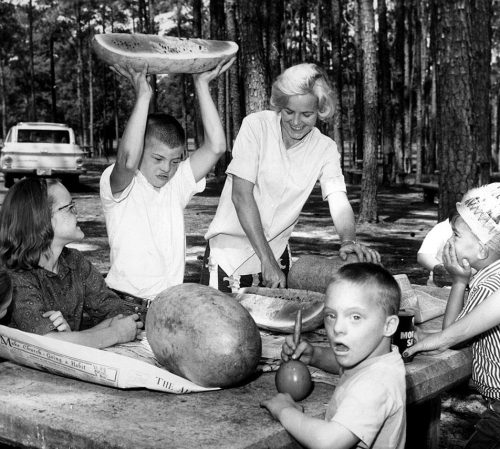 Parent groups throughout the country meet in Minneapolis, MN in 1950 to organize The Arc (originally the National Association of Parents and Friends of Retarded Children).

The Founding of The Arc

By 1950, across the United States, little was known about intellectual disability (then referred to as ‘mental retardation’) and developmental disability, or its causes. There were virtually no programs and activities to assist in the development and care of people with I/DD or to support families. It was common for doctors to tell parents that the best place for their child was in an institution. But these advocates wanted more. They wanted their loved ones to lead fulfilling lives in the community and not be shuttered away in dark institutions. Emboldened by their collective desire to raise their children in the home and their refusal to accept that institutionalization was the only option, The Arc was born.

The Arc becomes the first organization to put money into research on intellectual and developmental disabilities.

The Arc of Hilo

Since 1954, The Arc of Hilo, under prior namesakes until formally renaming as the Arc of Hilo in 1995, has been providing disabled people with the help they need to lead productive, community-driven lives. Since day one, our founding fathers and mothers have believed that people with disabilities deserve the same rights as everyone else and should be able to live, work, and play happily and healthily. We were the only non-profit of our kind in Hawaii for decades from the early 1950’s, and led the movement for community-based services for people with developmental disabilities in the Hawaiian Islands. What was once a strong mission and small operation has now grown into the largest employer for disabled people in Hawaii County. We hope that you will be inspired by our mission and help these people continue to thrive here in Hawaii.

On June 22, 1954, the Big Island Association to Help Retarded Citizens was created by a group of parents who wanted more than institutionalization for their children with developmental disabilities.

On April 25th, 1972, the name of the organization changed to Hilo Association to Help Retarded Citizens.

On May 4th, 1977, the name was amended to Hilo Association for Retarded Citizens.

Became The Arc of Hilo

On November 13th, 1995, the Hilo Association for Retarded Citizens became the Arc of Hilo, and a member of the Arc national provider association.